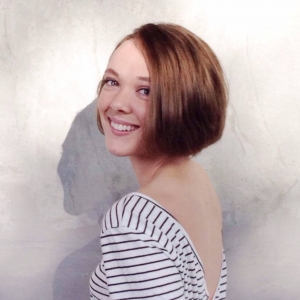 Nicole Gelinas grew up in a small agricultural town in Idaho, and later moved to Washington state to earn a Bachelor of Fine Arts degree in Visual Communication. She attended Northwest College of Art, double majoring in fine art and graphic design where she graduated top of her class in 2009. Nicole currently lives and works in Bremerton, Washington.

Gelinas works in a variety of mediums including, but not limited to, oil, graphite, charcoal as well as film, digital, and alternative photographic processes. She is inspired by abstraction and minimalism, but focuses primarily on the process, experimentation, and implementation of art making. Gelinas’s works are usually created in series, each with its own concept and technique. Examples of concepts include exploring the beauty of decomposition and the changing of objects over time. One such series attempts to visually reveal the feeling of seasonal depression through daily paintings reflecting the artists mood in relation to the weather. Some works are abstract explorations in mark making, while others examine the line between art and photography.