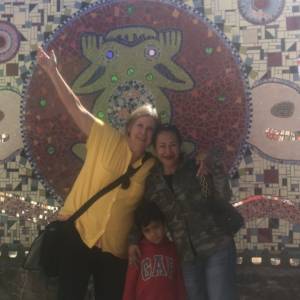 Dreams, imagination and wonder combine to inspire the stories told in these figures. Mostly figurative, with a whimsy and freedom of unexpected combinations.

The handbuilt figures are constructed in parts, in series, often with several heads or feet constructed and combined after firing. Little niches and drawers may reveal beads or buttons, artist books or feathers, odd hairdos or apples or birds, many birds. Figures may join other families, hats might appear and disappear, although surprises are always embraced.​

I never quite know how they will evolve, sometimes one figure ends up on a chair originally planned for another, a red apple falls into the basket upon a surprised head or a birds nest is woven into the hands of a figure entitled "When Women Were Birds".​

Each figure generates another possibility, which often shows up in the next. It remains a mystery.